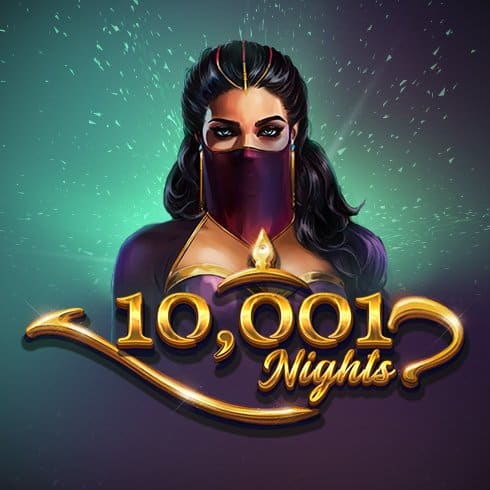 Based on the classic Middle Eastern folk tale, 10,001 Nights slot is a 5-reel video slot from Red Tiger Gaming. The Middle Eastern adventure combines beautiful visuals with plenty of extras including wilds, multipliers and a Destiny Spins feature with up to 20 free spins up for grabs. Keep your eyes peeled for Mega Wilds, as these make it easier to form impressive combinations. Want to know more about this Red Tiger Gaming title and its features? You're in luck! Here, we explore 10,001 Nights slot in more detail.

10,001 Nights slot is pretty straightforward. The action takes place across five reels, four rows and 20 fixed paylines. To form a winning combo, you need to land three or more matching icons or wilds on a payline. The only exception to this is the top-paying Sultan, which requires just 2 symbols to form a win.
The first thing to do is set your stake. Bets start at 10p per spin and rise to a maximum of £8 per spin. This betting range isn't the widest we've seen, so the game is probably best suited to recreational players rather than high rollers. Once you've set your wager, simply hit spin to set the reels in motion. If you prefer, you can use the Autoplay feature and spin 20, 50 or 100 spins automatically. You'll have the option to set up a win and loss limit which stop the function automatically if your bankroll goes above or below a certain amount.
The RTP here is set at 95.73%, which is just below the industry average of 96%. The slot is medium to high variance with maximum wins of 10,347x your total stake per spin.

10,001 Nights slot comes with a decent array of extras including base game modifiers and a lucrative free spins round. First up, let's explore the Feature Lamps feature. Whenever one of these symbols’ lands on the reels, it adds oil to the meter above the grid. When a feature is unlocked, it will be triggered on the next base game spin.
Imperial Spin feature: The Imperial Spin feature is triggered once you've landed 6 oil lamps. All low paying symbols will then be removed from the reels to make room for high payers.
Random Wilds feature: This feature is triggered after landing a further 7 oil lamps. When it's activated, a selection of wilds is added to the reels on the following spin.
Multi-Pick feature: This feature is activated after landing a further 8 oil lamps. When you do, you'll trigger a mini pick and click round where you'll choose a card to reveal a multiplier.
Mega Wild feature: The final modifier is triggered after landing a further 9 oil lamps. A colossal wild is then added to the reels that can fill an entire reel.
The main bonus round here is the Free Spins game, which is triggered by landing 3 or more scatters on the reels simultaneously. You'll begin the round with either 8, 10 or 12 free spins, depending on how many scatters triggered the game.

10,001 Nights slot is based loosely on the 10,001 Nights Middle Eastern folk tales. When you open up the game, you'll see the beautiful night's sky in the background and hear a traditional Middle Eastern soundtrack playing away. The reels are filled with various theme-fitting symbols, including gemstone style playing card icons as the low payers. The higher paying icons are the slippers, a camel, a tiger, an urn and Sultan himself. Sultan is the most rewarding symbol, paying 40x your stake for a five-of-a-kind combo.

Ever fancied a few spins on your lunch break? It's now possible with 10,001 Nights slot on mobile. As long as you've got a compatible device and an internet connection, you can get in on the action from any place at any time. Better still, everything remains the same on mobile as it does on desktop, so you won't be missing out on any of the features or gameplay.

If you're new to 10,001 Nights slot, you might want to play the game in demo mode. This allows new players to get to know the slot in a risk-free environment. Of course, you won't win any real money in freeplay mode as it's merely a demo.

Looking for a laid-back video slot? 10,001 Nights slot is the one for you. Sign up at NetBet today using your smartphone, PC or tablet device. If you're a fan of Red Tiger Gaming, check out other NetBet top slots such as Mega Pyramid, Gonzo's Quest, Golden Tsar and many more!